Lavrov: Russia's "Geographic Goals" in the War with Ukraine are Expanding 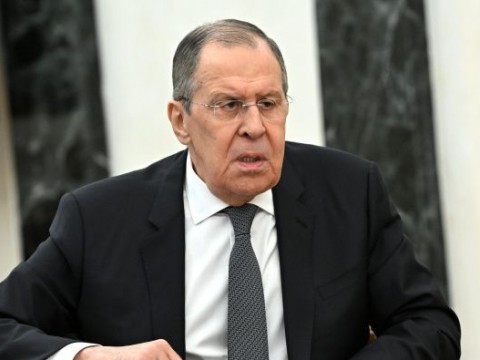 The "geographical" goals of the Russian invasion of Ukraine have changed. Now, these are not only the self-proclaimed DPR and LPR within the borders of the Donetsk and Luhansk regions of Ukraine but also "a number of other territories", Russian Foreign Minister Sergey Lavrov announced in an interview with RIA Novosti and RT, quoted by the BBC. A day earlier, the Russian president spoke of Kyiv's reluctance to resume negotiations.

In the interview, Lavrov threatened that if Western countries continue to supply Ukraine with long-range weapons, the geographic goals of the Russian army will expand.

In his words, Russia cannot allow "the part of Ukraine that Zelensky will control" to have weapons that threaten "our territory and the territory of those republics that have declared their independence and want to determine their future independently."

"As for the special military operation and the geographical coordinates, the president said very clearly, as you quoted him: denazification, demilitarization - in the sense that there are no threats to our security, military threats from the territory of Ukraine, this task remains," the minister said.

"When the negotiators met in Istanbul, there was one geography, and our willingness to accept the Ukrainian proposal was based on that geography, on the geography of the end of March 2022," he continued. – “Now the geography is different. These are not only DPR and LPR, but also Kherson region, Zaporizhzhia region and a number of other territories, and this process continues, consistently and persistently.”

Earlier today, the United States accused Russia of laying the groundwork for the annexation of Ukrainian territory.

The Russian invasion began on February 24, including an attempted offensive against Kyiv. At the end of March, after a meeting between the Russian and Ukrainian delegations in Istanbul, the Russian military withdrew and announced that they would focus their efforts on the self-proclaimed republics in Donbas, reminds the BBC.

It is there that the slow Russian advance continues in recent months. The Ukrainian army has retreated from Sievierodonetsk and Lysychansk but has repelled attempts to advance towards Seversk, Bakhmut and Sloviansk.

Already at the beginning of the invasion, the Russian troops succeeded in partially capturing the Kherson and Zaporizhzhia regions and appointing their administration there. The occupation authorities announce their intention to hold referendums on joining Russia. The proposed date is September 11 - the only day for voting in Russia, experts from the Institute for the Study of War write.