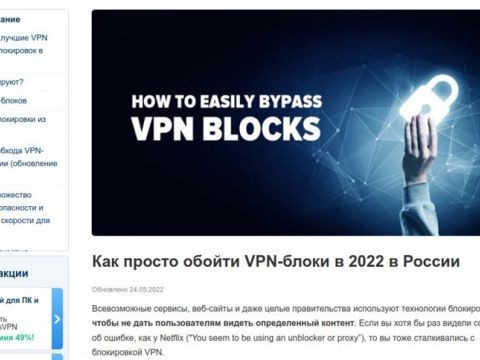 In the period between March and July, Russia became the second in the world in downloading VPN applications to bypass the restrictions on the Internet. This is indicated by data, cited by RBC, from AppMagic - a mobile application market analysis service.

A virtual private network (VPN) is built using encryption and allows access to resources restricted by the public network. This circumvents bans in force in Russia, but also in other countries while maintaining confidentiality conditions.

Russia has blocked a number of media outlets, including foreign websites, since the start of the war, and virtually all independent outlets have remained inaccessible. The company "Meta" (owner of "Facebook" and "Instagram") and thousands of sites (and some VPN services) were declared "extremists".

VPN apps were downloaded 12 million times in the first three weeks of July alone, according to this data. For comparison, Russia is 16th in the world in January 2022, when there are two million downloads.

Such apps have been downloaded in Russia tens of millions of times in total, according to AppMagic, but these are statistics from 2015 until now.

In the first place for the considered period is India, followed by Pakistan, Indonesia and the United States.

According to Google Trends, the peak of popularity is in the period March 13-19 and May 29-June 4, as well as between July 17 and 23, mainly in Moscow and the Moscow region, St. Petersburg, Kaliningrad and Yaroslavl regions.