Russian Report: Nazism is Not Persecuted in Bulgaria, Vandals write ‘Save Ukraine’ on Monuments 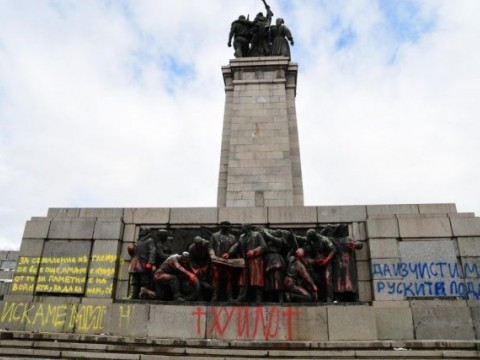 “In Bulgaria there are structures and organizations that openly support Nazism, they regularly organize a march in the name of the ideologist of Bulgarian Nazism and a torchlight procession in honor of a Bulgarian accomplice of the fascists - military pilot Dimitar Spisarevski.

At the same time, hooligans desecrated places in memory of Soviet soldiers, and marginals tried to write ‘Save Ukraine’ graffiti on the majestic monument of the Soviet Army.”

This is stated in the next report of the Ministry of Foreign Affairs of the Russian Federation entitled "On the situation with the glorification of Nazism, the spread of neo-Nazism and other practices that contribute to the escalation of modern forms of racism, racial discrimination, xenophobia and related intolerance".

It was published in the year Russia launched its first full-scale war in Europe since 1945 under the pretext of "denazification" of Ukraine, but is actually preparing to annex the occupied territories this fall. The country was excluded from the UN Human Rights Council and the Council of Europe - the oldest human rights organization on the continent, Moscow no longer recognizes the decisions of the European Court of Human Rights, and on the streets of Russian cities people are arrested just for coming out to protest with a sheet of white paper.

The text covers dozens of countries and is a peculiar mixture.

On the one hand, concrete examples, organizations and events are detailed, illustrating Moscow's thesis that "manifestations of extreme nationalism and xenophobia in Bulgaria are not rare". On the other hand, it recognizes that "the prospect of representatives of Bulgarian nationalist organizations entering the legislative and executive bodies of power is unlikely."

There is a detailed account of the state of monuments in honor of the army of the USSR and the attitude towards them, incl. the actions of the national authorities in the event of their damage. But the list includes both the large monument in the center of Sofia and a bust in the village of Strelcha of Marshal Zhukov, who commanded units in a completely different place in the Second World War, but was erected a monument to him in 2015 by the mayor Ivan Evstatiev, a member of National movement "Russophiles" because he was "the most spectacular military leader in human civilization".

All actions against Soviet monuments and memorial plaques are declared anti-Russian and the work of "vandals", "hooligans" and "marginals", who, according to the Russian Foreign Ministry, are "guilty, but as a rule manage to avoid punishment". An example of the latter is the decision of the Sofia City Court that the attempt to write “Save Ukraine” on the Monument to the Soviet Army on February 25 (the day after the attack on Ukraine) was recognized as an "action" and a form of protest against "Russia's aggression against Ukraine", and their arrest was declared illegal. However, the text says: "At the same time, open manifestations of discrimination against Russians and Russian-speakers from the population of Bulgaria were practically absent."

In the context of the "heroization of Nazism," there is talk of an "increase in hate speech and hate crimes against Turks, Roma, Muslims, Jews, people of African descent, migrants, refugees and asylum seekers", as well as the failure to integrate the Roma. But "the ethos of intolerance towards the national minorities living in the country is mainly carried out at the household level, although during election campaigns individual cases of the use of hate speech, mainly anti-Semitic statements, were also registered". And "at the same time, parties and non-governmental organizations that protect the interests of the Turkish and Roma population freely function in the country."

Included are criticisms against two governments - GERB and the coalition cabinet of Kiril Petkov.

About Boyko Borissov's government, it is written the following:

"Despite everything listed above, official Sofia does not hesitate to accuse the Russian Federation of ‘falsifying historical events’ of the war period. In particular, in 2020, on the 75th anniversary of the end of World War II, Bulgaria joined the declaration of the United States and a number of Eastern European countries, determining the USSR and Nazi Germany were equally responsible for starting the conflict. In the same year, the Deputy Prime Minister and Minister of Foreign Affairs E. Zaharieva, when discussing the issue of borders and reparations in Bulgaria, tried to downplay the efforts of Soviet diplomacy at the Paris Peace Conference in 1946."

About Kiril Petkov's government, it is written the following:

"The beginning of the special military operation for the denazification and demilitarization of Ukraine was used by the Bulgarian government headed by K. Petkov, which was actively involved in the aggressive campaign launched by the West, as an occasion to inflame Russophobia. The broadcast of the TV channel Russia Today, the news agency Sputnik, as well as related resources, were restricted, and cases of blocking of access to Internet news resources and applications of Russian banks were registered. There was a provocative mass expulsion of employees of Russian diplomatic institutions."

But otherwise, it is listed that:

no attempts have been made to prosecute Bulgarian veterans who fought on the side of the Bulgarian People's Army, partisan units and combat groups, as well as the Resistance Movement

there were no registered cases of banning the use of symbols and insignia of the Red Army and the USSR, obstruction of commemorative events on the occasion of the Victory in the Great Patriotic War, as well as opposition to the activities of local veterans’ organizations and non-governmental organizations fighting against neo-Nazism and the glorification of Nazism.”

The report recalls that the Criminal Code of Bulgaria contains an explicit text (Article 108) in which the preaching of a fascist or other anti-democratic ideology is equated with "forcible alteration of the public and state system established by the Constitution of the Republic of Bulgaria" (punishes with imprisonment of up to three years or a fine of up to five thousand BGN). But no cases of prosecution on this basis have been registered.

“The efforts of official Sofia in the fight against the spread of neo-Nazi ideas by the above-mentioned organizations are clearly insufficient”, says Russia.