Day 195 of the Invasion of Ukraine: Russians destroyed a residential building in Kharkiv 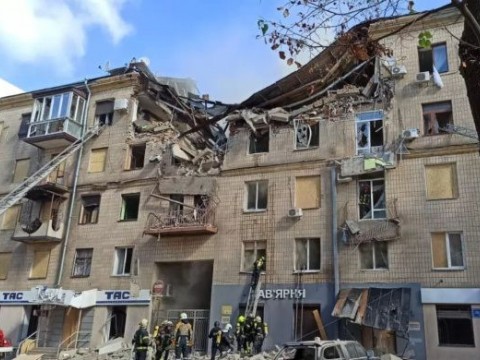 Borrell: “EU countries do not have enough weapons”

During a debate with EU MPs, the top diplomat urged member states to replenish their arsenals, saying the best way to do so was "together" because it "will be cheaper".

Borrell also admitted that the EU should have started training Ukrainian troops a year ago when some member states called for it, saying that if that had happened "we would be in a better situation".

In July, the EU increased the funding of military support for Ukraine by 500 million euros.

Since the start of Russia's war in Ukraine, the EU has provided Ukraine with military aid worth around 2.5 billion euros through the so-called European peace mechanism, with some of the weapons coming from the countries' own stockpiles

Warnings about empty stocks also came from member countries. Last week, German Defense Minister Christine Lambrecht said Berlin was "reaching the limits of what we can give from the Bundeswehr".

In July, the six largest European countries offered no new bilateral military aid to Ukraine, according to the Kiel Institute for World Economics.

Putin met with Defense Minister Sergei Shoigu and Chief of the General Staff Valery Gerasimov at the Sergeyevsky training ground and may later oversee the final phase of military exercises.

The military exercises, called Vostok-2022, began on September 1 and are to be held until September 7 at several training grounds in Russia's Far East and in the waters off its eastern coast, AFP reported.

According to Moscow, more than 50,000 soldiers and more than 5,000 units of military equipment, including 140 aircraft and 60 ships, will participate in the exercises.

Among the participating countries are several of Russia's neighbors, as well as Syria, India and key ally China.

Similar exercises were last held in 2018.

Russians destroyed a residential building in Kharkiv, there is a fire in the oil base in Kryvyi Rih

A residential building in the center of Kharkiv was destroyed as a result of Russian attacks this morning, the chairman of the Kharkiv Regional Military Administration, Oleg Sinegubov, reported on Telegram.

He specifies that all services and teams are on the scene. "The information about the victims is being clarified. At the moment, no one has been hospitalized," informed Sinegubov.

Later it became known that as a result of another shelling by the Russian invaders, the administrative building was also damaged, according to the information of the mayor of the city, Igor Terekhov. At the moment, there is no information about casualties, he adds.

Two women and a man were rescued from the ruins of the bombed residential building, Terekhov told UNIAN. They are not injured, the rescue work continues.

A strong fire broke out at the oil base in Kryvyi Rih, after an attack by the Russians, the head of the Dnipropetrovsk regional military administration, Valentin Reznichenko, informed in Telegram.

"We have a missile attack on Kryvyi Rih. A strong fire in an oil depot. Firefighters are working on the spot, the scale of the destruction and the information about the victims are being clarified," he said.

Ukraine's air force this morning shot down one Russian Ka-52 helicopter and five of the six missiles fired from the Caspian Sea.

Yesterday, in the Kryvyi Rih region, the anti-aircraft defense shot down an enemy missile, UNIAN recalls.

Earlier, Major General Dmitry Marchenko said that the Russian invaders wanted to capture the city of Kryvyi Rih in Dnipropetrovsk Oblast to create a springboard for an attack on Yuzhnoukrainsk and Voznesensk in Mykolaiv Oblast.

US intelligence: Russia is buying missiles and shells from North Korea

The Russian Defense Ministry is in the process of buying missiles and artillery shells from North Korea for its ongoing war in Ukraine, according to a US intelligence report, the Associated Press reported.

A senior U.S. official, speaking on condition of anonymity to discuss the report's findings, said yesterday that the fact that Russia is reaching out to the isolated state of North Korea shows that “the Russian military continues to suffer acute supply shortages in Ukraine, due in part to export controls and partly sanctions”.

US intelligence officials believe the Russians may try to purchase additional North Korean military equipment in the future. The intelligence findings were first published by the New York Times, AP notes.

The intelligence findings come after the administration of President Joe Biden recently confirmed that in August the Russian military received a shipment of Iranian-made drones for use on the battlefield in Ukraine.

Last week, the White House said Russia was facing technical problems with Iranian drones it received from Tehran in August for use in the war with Ukraine.

Russia took the Mohajer and Shahed series of unmanned aerial vehicles last month as part of its likely plan to acquire hundreds of Iranian drones for use in Ukraine, the AP said.