Day 197 of the Invasion of Ukraine: Shelling over the Zaporizhzhia NPP has been Renewed 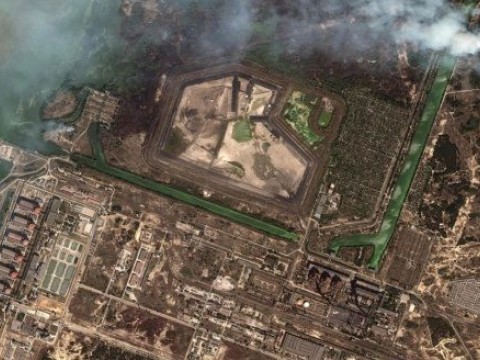 According to La Plant, the Ukrainians used modified Harpoon missiles to strike the Russian ships. According to information from Defense One, the missiles were dismantled from a warship and installed on trucks.

"They took them off the ship, put them on a couple of flatbed trucks, and then another truck was connected to them with a cable as a power source. It turned out that the missiles could be launched in this way, and the very next week they sank two Russian ships with these missiles," said the Pentagon spokesman. The training took place in May, and the use of the missiles was crucial in regaining Ukraine's control over Snake Island.

La Plante added that the Boeing Harpoon anti-ship missiles used in the attacks were provided to the Ukrainians by one of the US allies, without specifying which country.

The shelling over the Zaporizhzhia NPP has been renewed

Shelling near Ukraine's Zaporizhzhia nuclear power plant resumed yesterday, and the warring parties again exchanged accusations, a day after the International Atomic Energy Agency insisted on the creation of a security zone, the Associated Press reported.

Russian forces fired rockets and heavy artillery at the city of Nikopol, located on the opposite bank of the Dnieper River opposite the largest nuclear power plant in Europe, the regional governor Valentin Reznichenko announced.

"At the plant there are fires, power outages and other things that force us to prepare the local population for the consequences of nuclear danger," said Reznichenko.

In recent days, officials have distributed iodine tablets to residents to protect them in the event of a radiation leak.

In Energodar, where the plant is located, the mayor from before the Russian occupation, Dmitry Orlov, said the city had come under Russian attack for the second time yesterday and was without power.

"Employees of utilities and other services simply do not have time to complete emergency and restoration work, as another shelling reduces their work to zero," he said on the Telegram app.

Ukrainian President Volodymyr Zelensky announced that the army had regained control of several villages in Kharkiv Oblast in the northeast.

The US-based Institute for the Study of War reports that the Ukrainian counteroffensive is focused around Balakliia and Russian forces have been pushed back to the northern side of the Seversky Donets and Serednya Balaklia rivers.

Pope Francis: We live in a situation of world war

At the end of the general audience to the faithful in St. Peter's Square in Rome, Pope Francis declared that we live in a situation of world war.

After the general audience in St. Peter's Square, noticing the Ukrainian flags among the pilgrims, Pope Francis said that he "does not forget about the tortured Ukraine": Faced with all the military situations of our time, I ask each of you to be a builder of peace and to prays that thoughts and projects of harmony and reconciliation may spread throughout the world. Today we are experiencing a world war, let's stop it!

"Let us entrust to Our Lady the victims of every war, especially the dear Ukrainian population," Pope Francis said.

The UN with data on resettlement of children from Ukraine to Russia, Moscow denies

The United Nations has announced that it has credible evidence that Russian forces have moved children from Ukraine to Russia for adoption as part of large-scale deportations of people. The issue was discussed at a meeting of the Security Council, with Russia declaring the accusations "groundless".

The office of the United Nations High Commissioner for Human Rights also reports that Russian forces are conducting a "filtering" operation in the occupied territories with practices that violate human rights - searching, in some cases stripping people, detailed interrogations about family ties, political views and affiliation. People's mobile phones are also searched, fingerprints are taken. Ukrainians believed to be close to the Ukrainian government or military have been tortured and forcibly sent to Russian penal colonies, the UN also reported.

Russia's permanent representative to the UN, Vasyl Nebenzya, declared the accusations baseless and said that Ukrainians were fleeing their country to escape the criminal regime in Kyiv. And what is called filtering, according to Nebenzya, is simply registration of people arriving in Russia. Earlier, the US State Department announced that the Kremlin was directly managing the filtering program and the forced resettlement of thousands of Ukrainians.

Putin is burning the currency reserve. How long will there be money for the war?

It was thought that the Russian economy would collapse as a result of unprecedented Western sanctions imposed over the war in Ukraine. But this week, Russia's statistics office Rosstat announced that in the first six months of the year, the country's gross domestic product (GDP) fell by just 0.4 percent.

According to official figures, capital investment has risen, the ruble has recovered, and inflation, which soared at the start of the war, has begun to decline. This week, a senior Russian government official predicted that GDP for the full year would be just 3% lower than last year, and not quite the one-third contraction that had been forecast. What is really happening to the Russian economy?

As expected, oil and gas revenues, particularly from the European Union, continue to shore up the country's finances, although Germany and Italy have reduced their dependence on Russian energy. State-owned energy giant Gazprom has just announced a record first-half profit of 2.5 trillion rubles (41.4 billion euros), and the company's shares are up 30 percent.

"Even if the Russian economy performed worse than six months ago, this would still not stop Putin's intention to wage war," Maxim Mironov, professor of finance at the IE Business School in Madrid, told DV.

There is no doubt that Western sanctions are already affecting Russia. Last month, a Yale University study concluded that Russian imports had collapsed and the country's manufacturers were short of components, including semiconductors and other high-tech components.

The report states that Russia's position as a commodity exporter has been irreversibly damaged as Moscow is forced to sell more and more oil and gas to Asia at deep price discounts. Nearly a thousand Western companies have withdrawn or limited their operations in Russia, leading to upheaval and mass layoffs.

Collapse of the economy within two years

"In the long term, Russia will be nothing more than a gas station for China... but I don't believe that its economy will collapse in two years," Rolf J. Langhamer, a German trade expert and former vice president of the Institute for World Economics in Kiel (IfW-Kiel), told DV.

In this regard, he recalls that only in the first half of this year, Germany paid Russia nearly 20 billion euros for energy imports, which is 50% more than in the same period last year. "Even if the volumes decrease, with the sharply rising prices we will still pay them approximately 3 billion euros per month," adds the expert. But despite the better-than-expected economic picture, the Kremlin stopped releasing a range of economic data shortly after Russian tanks rolled into Ukraine.

Putin is burning through the country's financial reserves

The Yale researchers note that Russia is gradually depleting the $600 billion in foreign currency reserves that served as a financial cushion for Putin in the early months of the war. According to them, 80 billion dollars have already been spent, and another part has been frozen by the West.

Alexander Mikhailov, an associate professor of economics at Britain's University of Reading, believes that Putin will only run out of money to finance the war if the West can fully reduce its dependence on Russian energy, which he says will take another 2-3 years.

In Russia, they are used to deprivation

If Putin's financial capabilities decline, Russia may start printing money to meet rising military spending. According to Mihailov, this would be "madness" as it "will lead to a huge devaluation of the ruble, hyperinflation and social unrest".

At the same time, he recalls that in Russia they have been used to deprivation since Soviet times and the years after the collapse of the Soviet Union.

"In the West there is 10% inflation and people are really scared and they are demanding that politicians do something. However, Russian society does not work that way, so Putin has more leeway to reduce the standard of living by 20-30%, without fearing serious opposition," says the expert.