Unofficially: Izyum has Fallen. Officially: The Administration in Kharkiv confirmed the Capture of Kupyansk 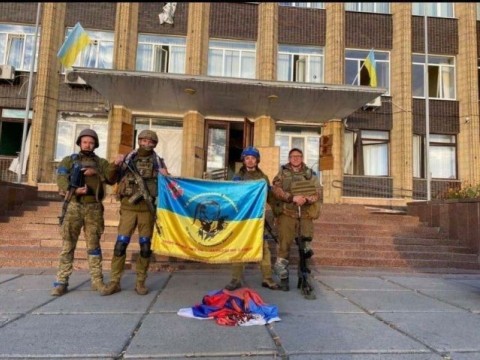 Russian-language channels in Telegram exploded with news of the fall of Izyum. "Izyum surrendered", "Izyum fell" and "Izyum was surrendered" are the variants with which various groups announce the situation around the city, which is important for the outcome of the Kharkiv counter-offensive operation of the Ukrainian Armed Forces (VSU). So far, there are no official confirmations from Kyiv and Moscow, only an hour ago Ukraine officially confirmed that the Ukrainian Armed Forces had captured Kupyansk.

At 2:30 p.m., a video appeared at the entrance sign at the entrance to Izyum, showing the Ukrainian flag being waved. "On September 10, 2022, a reconnaissance company of the 25th amphibious brigade together with the third special forces regiment. We are already in Izyum. "Vse bude Ukraine! Our flag is already flying," says a voiceover.

Around 3:00 p.m. Bulgarian time, the Russian news agency RIA Novosti reported that "the situation in the city is serious":

“The situation in Izyum is serious, as a result of the constant shelling by the Ukrainian troops in the last two weeks, there is a lot of destruction in the city”, said the head of the Izyum regional administration, Vladyslav Sokolov, the message reads.

Russia's military correspondent Yevgeny Poddubny, who voices all the combat successes and propaganda actions of the Russian army in an alarming, almost panicky tone, quoted by Gazeta.ru, reports that for the Armed Forces of the Russian Federation, the situation in the battles near Kharkiv is extremely difficult. According to Poddubny, who can at least be trusted for this, the reinforcements sent by Moscow in the Kharkiv direction slowed down the Ukrainians but did not stop them.

Natalya Popova, adviser to the chairman of the Kharkiv Regional Council, announced the liberation of the key city of Kupyansk. "Kupyansk - this is Ukraine. Glory to the Ukrainian Armed Forces," Popova wrote and published the already famous photo of Ukrainian servicemen with the national flag against the background of the administrative building of Kupyansk. The General Staff of the Armed Forces of Ukraine continues its operational silence and does not comment on new conquests of Ukraine in the Kharkiv region.

At noon on Saturday, Polish military expert Jarosław Wolski, who is popular for his restrained and more conservative forecasts, announced that Izyum would fall within hours. Russian minibloggers confirm that the Russians are withdrawing from Izyum and predict that the Ukrainians will move “down the east coast from the north and south and converge on the soon-to-be-Ukrainian city of Lyman. Similar reports are already available on social networks, but it cannot be reliably assessed whether they are the result of a real factual situation or euphoric propaganda. Yevgeny Poddubny also reports on active actions of the enemy (VSU) in the Krasniy Lyman area.

"The adversary, as expected, began active operations in the Krasniy Lyman region, and with this, the Kyiv regime is suffocating our group in Izyum with the threat of encirclement. War is not just about victories. These are always victories through defeats. And we must become better and stronger. And the next few days will be hard. And this should bring us together, not the other way around," the Kremlin's military messenger stated dramatically.

"Near Izyum at the crossroads, which divides into three, the Russians have left piles of fuel, ammo and food," commented a blogger on Twitter. The comments are that the Russian army retreated deliberately in order to minimize the number of killed and captured when the VSU entered the city by force.

At 2 p.m. Kyiv time on Saturday, UNIAN reported that the Ukrainian Armed Forces had advanced in several directions to the south by two to several tens of kilometers.

The agency quotes the spokeswoman of the joint coordination press center of the Army Natalya Gumenyuk. "There is progress of our troops along the southern front line in different sectors from two to several tens of kilometers. Soon we will definitely report on those settlements that are happy to welcome our fighters," she said.

At the same time, after the impromptu raising of the Ukrainian flag in Balakliia, today the command of the Ground Forces of the Armed Forces of Ukraine officially raised the flag of Ukraine.