Day 201 of the Invasion of Ukraine: Russia Shells Critical Infrastructure, Zelensky does not Plan Negotiations with Putin 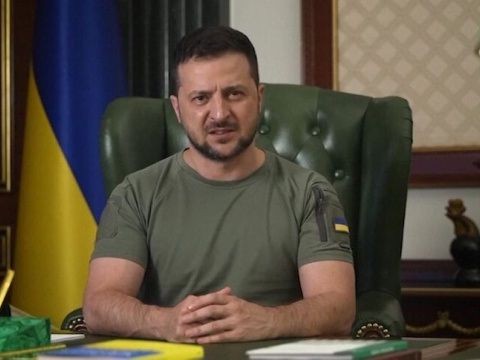 Zelensky does not plan negotiations with Putin

Ukrainian President Volodymyr Zelensky said in an interview with CNN that he is not planning negotiations with Russian President Vladimir Putin for now. “The main goal at the moment is to get back all the territories”, added Zelensky against the backdrop of a successful counteroffensive of the Ukrainian army.

Russian attacks on energy infrastructure have left large parts of eastern and central Ukraine without power, the country's president announced. According to Volodymyr Zelensky, the "blackout" is complete in Kharkiv and Donetsk regions and partially in Sumy, Zaporizhzhia and Dnipropetrovsk. According to Russian sources, there are no electricity problems in Donetsk.

Earlier, the work of the Zaporizhzhia NPP was suspended as a precautionary measure due to the ongoing hostilities.

The occupation of the plant by Russian troops is the reason why its security is at risk, French President Emmanuel Macron said in a telephone conversation with Russian President Vladimir Putin, who in turn blamed Kyiv for regular attacks in the area. According to the Kremlin, Putin called for "non-politicized interaction" on the matter involving the International Atomic Energy Agency.

In his latest video address, the Ukrainian president noted that 200 days have passed since the beginning of the Russian aggression against his country. Volodymyr Zelensky thanked the servicemen:

"Today your actions in the North, South and East are seen and noticed by all. The world is in awe and the enemy is in panic. Ukraine is proud of you, believes in you, prays for you and awaits you. The road to victory is not easy, but we are confident that it is within your power. You will reach our border, in all areas. You will see our frontier furrows and the enemy's backs. You will see the eyes of our men shining and the heels of the occupiers. They will call it goodwill gestures. We'll call it a victory."

Zelensky confirmed that the strategic eastern city of Izyum was captured as part of the counteroffensive, as well as Balakliia and Kupyansk. The military command announced that 3,000 square kilometers had been liberated since the start of the offensive near Kherson and Kharkiv.

According to the Russian side, its security forces have prevented terrorist acts in the Kherson region. It was also reported about powerful explosions in Kherson, and also that in the course of the so-called "special military operation" the Priazov part of the Zaporizhzhia region and the entire Kherson region with the large cities of Kherson, Melitopol and Berdyansk were taken under control. RIA Novosti writes that both regions, in which new administrations have been formed, have expressed a desire to join Russia.

Meanwhile, air raid sirens have been activated across Ukraine. Residents shared on social media that they heard explosions.

On Saturday, the Russian Ministry of Defense announced that it was withdrawing part of its forces from the Kharkiv region, following the counter-offensive of the Ukrainian army, during which Kyiv claimed to have regained territory of more than three thousand square kilometers.

"Complete power outage in Kharkiv and Donetsk regions, partially in Zaporizhzhia, Dnipropetrovsk and Sumy regions. Terrorists from the Russian Federation remain terrorists and attack critical infrastructure. Without military facilities, the goal is to deprive people of light and heat," wrote Ukrainian President Volodymyr Zelensky on Twitter.

Without electricity and water in a large part of eastern Ukraine, one of the largest thermal power plants was hit

Much of eastern Ukraine is without power after several reports of explosions and damage to critical infrastructure, Reuters and UNIAN reported. An air alert has been activated throughout Ukraine.

Mykhailo Podolyak, an adviser to Ukrainian President Volodymyr Zelensky, confirmed that TPP-5, one of the largest thermal power plants in the country, was hit.

"Deliberate direct strikes on critical civilian infrastructure, in particular on the largest Kharkiv TPP-5, are an unconditional manifestation of Russian terrorism and its desire to leave civilians without light and heat. Such a cowardly 'response' to the army's own desertion from the battlefield...,” he tweeted.

Power problems were reported in Ukraine's second-largest city - Kharkiv, in Kramatorsk - which is the administrative center of Donetsk Oblast, and throughout Sumy Oblast, as well as in Poltava, Odesa and Zaporizhzhia Oblasts.

Water supply has been cut off in several villages in the Kharkiv region.

The regional governor Oleg Sinegubov announced that these infrastructure problems were caused by the Russian troops: "Dear citizens, the territory of the municipality is currently without electricity after the occupiers hit critical infrastructure objects. Please remain calm. We are working to fix the problem." , the announcement said.

"This is a vile and cynical revenge of the Russian aggressor for the successes of our army at the front, in particular in the Kharkiv region," said the mayor of Kharkiv Igor Terekhov.

"The Russians have hit the energy infrastructure. They cannot accept defeats on the battlefield. But we will manage. All services are now working. We will recover.

We will restore everything as quickly as possible", wrote the regional governor of the Dnipropetrovsk region Valentin Reznichenko.

There are problems with electricity in the Sumy region, as Dmitry Zhivitsky - the head of the region, said that the electricity system in the region remains unstable.

A number of trains are expected to be stopped or delayed for hours.

Zelensky commented on today's shelling, saying that the Russians remain terrorists. The president also posted a video of a fire after one of the Russian strikes tonight. "Cold, hunger, darkness and thirst are not so terrible and deadly to us as your 'friendship and brotherhood'. But history will put everything in its place. And we will have gas, light, water and food... and that WITHOUT you!” he wrote.

As of 10:40 p.m., the power supply in the Sumy region has been fully restored, Dmitry Zhivitsky reported in Telegram. The head of the Poltava regional military administration, Dmitry Lunin, said that electricity and water supply have been restored in all areas of the region.