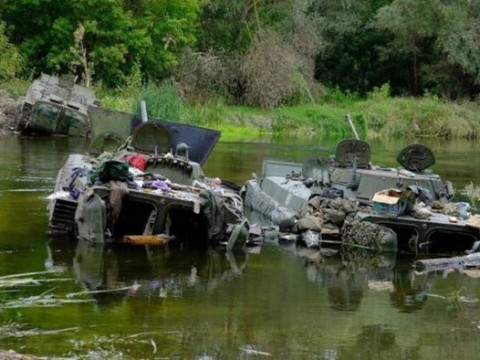 Ukraine announced the recapture of more than 20 settlements in Kharkiv and Donetsk regions within 24 hours.

It comes a day after Russia confirmed it was withdrawing from the area, though it explained that its actions were related to the "implementation of the special military operation" (as Moscow calls the war in Ukraine, which today entered its 201st day).

Check our extensive coverage of the 201st day here: https://www.novinite.com/articles/216686/Day+201+of+the+Invasion+of+%3Cb%3EUkraine%3C/b%3E%3A+%3Cb%3ERussia%3C/b%3E+Shells+Critical+Infrastructure%2C+Zelensky+does+not+Plan+Negotiations+with+Putin

Kharkiv also reported the restoration of electricity in affected parts of Kharkiv region after a Russian counteroffensive left it without power. The mayor of the city - Ukraine's second largest - spoke of restored water supply and the operation of the subway and ground electric transport, also affected by the shelling.

Russian strikes also affected, according to Kyiv, power supply in parts of Zaporizhzhia, Dnipropetrovsk and Sumy regions, as well as in all of Donetsk. In some of these areas, supplies have already been restored.

"Russia has likely ordered the withdrawal of its forces from all of the occupied parts of Kharkiv Oblast west of the Oskil River," said a morning briefing by British military intelligence posted on Twitter.

According to the Institute for the Study of War, Ukraine regained more territory in September than Russia has seized since April. And this Washington-based think tank analyzed Russia's announcement of the redeployment of forces over the weekend as confirmation of a withdrawal from settlements around Kharkiv, including on the west bank of the Oskil River, the largest confluent of the Seversky Donets River, passing through the eastern part of the district.

According to the UNIAN agency, the Hoptovka border crossing in the northern part of the Kharkiv region on the Ukrainian-Russian border is among the recaptured locations. The agency also broadcasts a video distributed by the Territorial Defense of Ukraine.

On Sunday, the governor of Kharkiv Oblast, Oleg Sinegubov, announced that the Ukrainian military had liberated more than 40 settlements (it is not known how many of them are included in the number of the new 20 announced by the army). Exactly how much territory has been recaptured is also unknown: President Volodymyr Zelensky spoke on Saturday night about 2,000 square kilometers since the beginning of the month, a little later the army talked about 3,000.

The correspondent of "El Pais" Luis de Vega notes that there are practically no more Kremlin forces in the Kharkiv region, but this is yet to be confirmed.

"El Pais" also notes that before an offensive, Kyiv dropped leaflets with instructions for Russian soldiers and their helpers who want to surrender, so that they know how to do it.

The military are advised to lay down their weapons, stand tall, raise their hands, shout "surrender" and (if they choose) raise a white flag. There are messages attached to the notes: for example, "The Russians are using you as cannon fodder"; "Your life means nothing to them"; "You need your family". There are also contact phones.

During the night, there were also reports of heavy shelling by Russian forces in areas to the east. According to British intelligence, the rapid Ukrainian successes have serious implications for Russia operationally and the situation is likely to undermine the confidence of the forces sent to Ukraine in the senior echelons of the Russian military leadership.