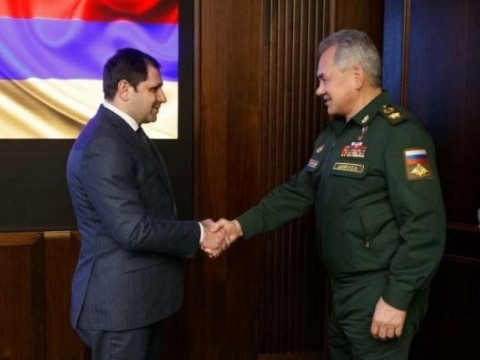 Armenia sought help from the Russian Federation because of border fighting with Azerbaijan that flared up last night and received a promise of such help.

Today, the Minister of Defense of Armenia, Suren Papikyan, spoke by phone with his Russian counterpart, Sergey Shoigu, the Ministry of Defense of Armenia announced. Papikyan presented the situation that has arisen "as a result of the great aggression of Azerbaijan against the sovereign territory of Armenia", writes ARMENPRESS. The two have reached an agreement to take the necessary steps to stabilize the situation, the agency adds, without specifying details.

Fighting between Azerbaijan and Armenia in the Nagorno-Karabakh region of the South Caucasus flared up last night. Armenia claims that Azeri military units attacked Armenian positions in three locations with artillery and large-caliber weapons. Azerbaijan blames Armenia for the escalation of tension, for "provocations", for the fact that Armenia is shelling the positions of the Azerbaijani army in the direction of the state border.

Azeri Daily reported this morning that a ceasefire had been agreed as of 9:00 a.m. on September 13, although Armenia continued to shell.

Armenia does not report that a truce has been reached - on the contrary. This morning - the Ministry of Defense of the country claims - Azeri forces are advancing simultaneously in several directions along the state border. Ministry spokesman Aram Torosyan released a video showing Azerbaijani troops breaching the border and approaching Armenian positions and retreating after encountering them. There are said to be casualties.

As of 8 a.m., positional battles continued in some parts of the Armenian-Azerbaijani border. Azerbaijani forces are not stopping their offensive attempts, Torosyan said at a briefing. "The enemy continues to use artillery, mortars, drones and large-caliber weapons in the direction of Vardenis, Sotk, Artanish, Ishkhanassar, Goris and Kapan, striking both military and civilian infrastructure," he added.

Not only Russia, the US also reacted to what happened. US Secretary of State Antony Blinken called for an immediate end to hostilities.