Zelensky made a Surprise Visit to Izyum 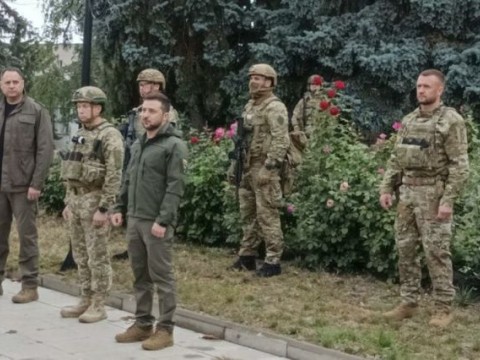 The President of Ukraine Volodymyr Zelensky made a surprise appearance today at the official ceremony of raising the Ukrainian flag in the city of Izyum. The city was liberated days ago by the Ukrainian Armed Forces, and the Russians fled in panic, leaving behind tanks, armored personnel carriers and ammunition.

The Airborne Brigade in Sicheslav announced the visit on Facebook.

"The celebrations were attended by the President of Ukraine Volodymyr Zelensky, the Deputy Minister of Defense Anna Malyar, representatives of the Armed Forces of Ukraine and other security units, which a few days ago liberated the city from the fascist invaders," the statement said.

At the beginning of the celebrations, those present honored the memory of the fallen defenders with a minute of silence, after which the president thanked the soldiers for the liberated Ukrainian lands, and the Ukrainian flag was raised above the city council in a solemn atmosphere.

"No occupier will be able to win the hearts of Ukrainians, they can occupy the territory, but they will not be able to occupy the people," Zelensky said in Izyum.

"The last few months have been very difficult for you. I am asking you to be safe because you are the most valuable thing we have," the president addressed the military.

Volodymyr Zelensky talks with the mayor of Izyum, Valery Marchenko, about the situation in the city. There are currently about 10,000 residents left in the city, i.e. one fifth of the population of Izyum before the war.

The topic of Zelensky's visit immediately became one of the most actively discussed topics in Telegram. Izyum is still very close to the contact line between the Ukrainian and Russian armies. Therefore, the president's move was interpreted as an extraordinary display of courage.

"Our president is in Izyum, where is Putin?"

Russian propagandists, for their part, are furious.

The comment implies that the Russian army in the region has not yet finished its work.

In the same spirit is an ironic publication of the Russian terrorist Igor Girkin-Strelkov.

"Zelensky's arrival in Izyum once again demonstrated the highest level of planning of the Special Military Operation and the high competence of the Russian General Staff, which managed to prevent a major provocation by Ukrainian nationalists in advance. The timely regrouping of our troops from Izyum allowed to avoid creating a dangerous international precedent with the appearance in the region of our troops of the respected partner in Kyiv," he wrote.

In another post on the same topic, Strelkov points out that Izyum should be within range of Russian artillery, and in a third, that while Zelensky was celebrating in Izyum, the Ukrainian Armed Forces bombed Belgorod Region in Russia.