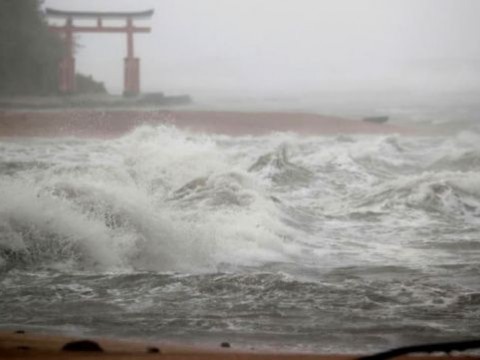 Weather officials have issued an emergency warning for violent winds, high waves and storm surges for Kagoshima Prefecture in southwestern Japan, reported NHK. They said that a powerful typhoon could trigger the kind of disaster that is seen only once in a few decades.

Southern Kyushu could get as much as 600 millimetres of rain in the 24-hour period through Monday morning.

The agency also warns that as the typhoon is large, rain and winds could intensify even in areas far from it. Heavy precipitation is expected in western and some parts of eastern Japan through Monday. The typhoon will head northeast and travel across Japan's main island of Honshu through Tuesday, according to public broadcaster NHK-World Japan.

About two million people in southwestern Japan have been ordered to evacuate ahead of a powerful typhoon forecast to hit the region on Sunday.

Other airlines are also cancelling services through Monday, mainly on routes serving airports in the Kyushu and Shikoku regions.

Bullet train services are also being affected. As of 1:30 pm, the operator of the Kyushu Shinkansen has suspended all services for Sunday and Monday, reported NHK.

The typhoon is forecast to hit southern Kyushu, one of Japan's southwest islands, specifically within Kagoshima Prefecture.

Residents in 965,000 households have been ordered to evacuate across the seaside cities of Miyazaki, Kagoshima, and Amakusa.

A level five alert, the highest on Japan's disaster warning scale, was issued to more than 14,000 people in the city of Nishinoomote on Kyushu island, NHK reported.

"There is a possibility that it will be recorded heavy rain and an emergency heavy rain warning will be announced," said Japan's Meteorological Agency (JMA).

Ryuta Kurora, a JMA official, warned Saturday that strong winds could cause houses to collapse. Kurora urged residents to evacuate before the storm hit to escape the risk of landslides and flooding.

Japan Airlines and All Nippon Airways have already cancelled at least 335 flights that were scheduled to depart from or arrive at airports in Japan on Sunday, according to NHK.

"The eye of Typhoon Nanmadol is clearly visible in satellite images. The typhoon has developed rapidly since Friday night," NHK reported.