Day 209 of the Invasion of Ukraine: Separatists in Donetsk reported a Deadly Attack by Ukrainian Forces 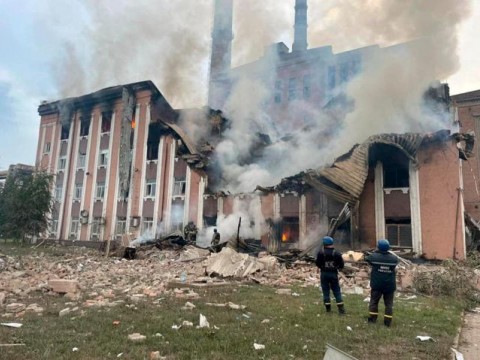 Separatists in Donetsk reported a deadly attack by Ukrainian forces

Ukraine said its troops had advanced further east into territory recently abandoned by Russia, paving the way for a potential offensive against Moscow's occupation forces in the Donbas region. Kyiv's calls for more Western weapons continue.

Thirteen people have been killed and several others injured in a series of explosions in the pro-Russian separatist-run city of Donetsk in eastern Ukraine, the Russian-backed mayor said. Alexei Kulemzin blamed the attack on Ukrainian forces. So far, there is no comment from Ukrainian officials.

Ukraine has been waging a counteroffensive in the south and northeast for weeks, with the biggest advance made earlier this month in the northern Kharkiv region. In his late night video address, Ukrainian President Volodymyr Zelensky stated:

"In the Kharkiv region - we stabilize the situation, hold our positions. Firmly. So firmly that the occupiers fall into a palpable panic. Now the pace is very important. The pace of stabilization in the liberated areas, of the movement of our troops. The pace of restoration of normal life in the liberated territory."

The head of the Luhansk region, Serhii Haydai, said that Ukraine now controls the left bank of the Oskil River, considered the front line in northeastern Ukraine. According to him, the next goal will be the liberation of the city of Lyman, which was captured by Russian forces in May.

Today, Russian-appointed local authorities in the Luhansk region announced that seven people were killed in a Ukrainian strike on the village of Krasnorechenskoe. That night, Russian forces continued to actively shoot in the direction of Donetsk and Horlivka. There was also shelling against Seversk. At least 2 houses were destroyed. The town of Avdeevka was also under fire. In the Russian-occupied Melitopol, Zaporizhzhia Region, two loud explosions were heard, Mayor Ivan Fyodorov announced. An air strike by Russian forces against a high-rise building in Bakhmut has caused three entrances to collapse, local authorities said.

Yesterday, Russia was accused of attacking the nuclear plant in the south. Ukraine's state-run nuclear company Energoatom said an explosion occurred 300 meters from the reactors and damaged buildings at the power plant, as well as a nearby hydroelectric plant and transmission lines. However, the plant's reactors were not damaged and are operating normally.

Ukraine has again called on the West to step up military aid to help it turn the tide of the battle against Russia.

"The occupiers are clearly in a panic": the Ukrainian Armed Forces are preparing to retake the entire Luhansk region

"The occupiers are clearly panicking," Ukrainian President Volodymyr Zelensky said in a televised address in the early hours of September 20, adding that the focus of the Armed Forces of Ukraine (VSU) was now on "speed" in the liberated areas: "Speed, with at which our troops are moving. The speed at which normal life is being restored."

Zelensky hinted that he would use his video address to the UN General Assembly on Wednesday to urge countries to speed up arms and aid deliveries.

"We are doing everything possible to ensure that Ukraine's needs will be met at all levels - defense, financial, economic, diplomatic," the Ukrainian president said.

The VSU have regained full control over the village of Bilokhorovka and are preparing to recapture the entire Luhansk region from the Russian occupiers, said the governor of the region, Serhii Gaidai. The village is just 10 km west of Lysychansk, which fell to the Russians after weeks of fierce fighting in July. "There will be a fight for every centimeter. The enemy is preparing its defenses. So we will not just go in blindly," Gaidai wrote on Telegram.

The Kremlin's thesis is that the main goal of the so-called "special military operation" in Ukraine is to seize Luhansk and the neighboring Donetsk region, which make up the industrialized eastern Donbas region. Ukrainian troops began moving into Luhansk after driving Russian forces out of the northeastern Kharkiv region in a lightning counter-offensive this month.

In the south of the country, where another Ukrainian counteroffensive is progressing more slowly, Ukraine's armed forces said they had sunk a barge carrying Russian troops and equipment across a river near Nova Kakhovka in the Kherson region.

"Attempts to build the passage failed to withstand the fire of Ukrainian forces and were stopped. The barge became an addition to the underwater forces of the occupiers," the military said in a statement on Facebook.

According to information from the command of Operation "South" on Facebook, the situation remains constantly tense, but under control:

"The enemy continues to focus its efforts on organizing the defense and trying to hold the captured territories, as well as trying to disrupt the active actions of the Ukrainian defense forces by shelling the positions of our troops along the line of contact. The enemy is regrouping its units in certain areas, bringing in reserves and strengthening air reconnaissance."

"In order to improve the tactical situation, the enemy tried to carry out an assault operation with a force of one motorized rifle platoon in the direction of Davidov Brod - Belogorka. It was discovered in time and stopped with artillery fire. The enemy retreated with losses," is written in the report.

Kremlin on the mass graves near Izyum: “This is a lie, the same lie as at Bucha”

"It's the same scenario as Bucha. It's a lie and we will of course stand by the truth in this story."

After the withdrawal of Russian troops from there, Ukraine reported that 450 bodies, mostly civilians, had been found. The bodies were buried in mass graves near Izyum.

Despite the efforts of Putin's “chef”, Wagner's attempts to recruit criminals fail

Russian private military company Wagner is trying to recruit more than 1,500 convicted criminals to join Russia's war in Ukraine, but many are refusing to join, a senior US defense official said yesterday.

"Our information indicates that Wagner is suffering heavy losses in Ukraine, as can be expected - mostly among young and inexperienced fighters," the US official told reporters.

The European Union imposed sanctions on Wagner, accusing it of covert operations in favor of the Kremlin. According to Russian President Vladimir Putin, “Wagner Group” does not represent the Russian state and as private military contractors, they are allowed to work anywhere in the world as long as they do not violate Russian law.

The US official, who spoke on condition of anonymity, pointed to recent videos on social media that appear to show Yevgeny Prigozhin, who the US Treasury Department and the European Union say Wagner is linked to, trying to recruit prisoners. The video shows the Russian oligarch known as "Putin's chef" trying to recruit Russian prisoners as well as Tajiks, Belarusians and Armenians.

Later, Prigozhin officially commented on the clip, stating that "Wagner" and he personally conducted recruitment among prisoners to send to the front in Ukraine. "If someone doesn't like it, send their children to the front," he said.

The Ukrainian government and numerous human rights organizations have accused the private military company Wagner of committing war crimes in Syria and eastern Ukraine since 2014.

The emergency line supplying power to the Zaporizhzhia NPP has been cut, the IAEA says

The power supply to the emergency line supplying the Ukrainian nuclear power plant "Zaporizhzhia" with electricity for its essential activities was interrupted yesterday. The line has so far been connected to the Ukrainian power grid, Reuters reported, citing a statement from the International Atomic Energy Agency.

“The plant remains connected to one of the main power lines restored last week”, the IAEA added in its announcement.

The head of the IAEA, Rafael Grossi, described the news of the interruption of the emergency line as a step backwards after the progress reported last week.

Also, BTA reported this morning that Poland's interior ministry is handing out iodine pills to firefighters in the country in view of the fighting around the Russian-occupied Zaporizhzhia nuclear power plant in Ukraine.

The ministry said today that a sufficient amount of potassium iodide tablets will also be prepared for every Polish citizen.

"This is a standard procedure provided by law that applies in the event of a possible (nuclear) radiation emergency," the agency said. However, according to him, there is currently no exposure to nuclear radiation.

Authorities also warned citizens not to take iodine pills as a preventative measure.

The shelling of facilities at the Zaporizhzhia NPP caused international fears of a nuclear disaster.

Russia moved its submarines further away from Crimea

Russia's Black Sea Fleet has moved some of its submarines from the Crimean port of Sevastopol to Novorossiysk in the eastern Black Sea, the British military said on Tuesday.

Novorossiysk is a key military and commercial port in the Krasnodar region of southern Russia.

The move is likely due to the recent change in the level of the local security threat due to the increased capacity of the Ukrainian military to carry out long-range strikes, the British Ministry of Defense said on Twitter.

"In the last two months, the headquarters of the fleet and its main airfield for naval aviation have been attacked," the ministry added.