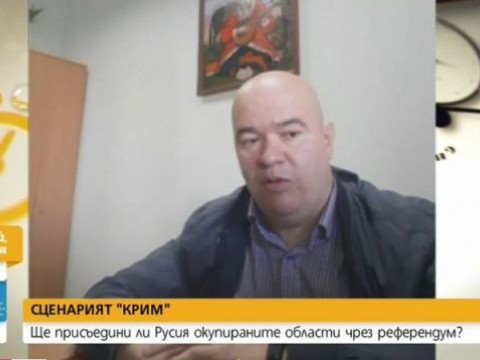 Russia has banned the teaching of the Bulgarian language, closed Sunday schools and centers in the Zaporizhzhia region. This was confirmed on Nova TV by Prof. Vladimir Milchev, dean of the Faculty of History at Zaporizhzhia University.

“There are 30 Bulgarian villages in the area, we have a very good network of Sunday schools, which are supported by the Bulgarian Ministry of Education and local patrons. My friends from these villages tell me that it is forbidden to teach in Bulgarian”, said the dean and specified that a large part of the inhabitants of these villages have left them.

According to him, the announced referendum in the occupied regions is the last chance for Putin to legitimize the Ukrainian lands captured by Russia. "This is the shortcut to further escalation in the region," said Prof. Milchev.

According to him, the referendum cannot be legitimate. "There will not be a sufficient number of votes, as the majority of residents of large cities such as Melitopol and Energodar have left them and are in Ukrainian-controlled settlements," said Prof. Vladimir Milchev.