Bulgaria’s Independence Day: No Lights for the Soviet Monuments and in Protest against Russia 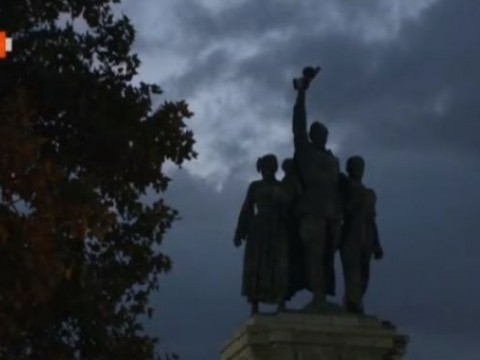 On the day when Vladimir Putin surprisingly announced a partial military mobilization and veiledly threatened NATO with nuclear weapons, Bulgarian society symbolically declared itself against Russian aggression with an ultimatum to stop lighting the monuments of the Soviet Union in five of the country's largest cities.

Journalists, writers and university professors got behind the "Darkness for Light" initiative. They categorically demanded that the floodlights of the Sofia Monument to the Soviet Army (MOCHA), infamously towering in the center of the capital, be turned off.

The Metropolitan Municipality turned off the floodlights of MOCHA (The Soviet monument in the center of Sofia) at 20:00 p.m. on September 21. Thus, Sofia welcomed its Independence Day holiday with the strong message of "Darkness for Light". This first symbolic step is important in the fight against the pernicious Russian influence in Bulgaria and the fratricidal war in Ukraine.

Plovdiv also joined the initiative, where the “Alyosha” monument also fell into darkness. The mayors of Varna, Burgas and Stara Zagora refused to do so. The protest was covered by Ukrainian and foreign media.

The monument to the Soviet Army in Sofia with the floodlights turned off at 20:00 on the evening of September 21.

Named by Joseph Stalin in 1946 as the "Monument of the Soviet Army", it was presented in 1954. It was created by court artists of the Soviet regime in our country, such as Ivan Funev, Lyubomir Dalchev and Vaska Emanuilova.

After the fall of the Berlin Wall, the citizens of Sofia unsuccessfully tried to remove this militaristic sculptural configuration, including the historical misinformation about the Red Army as a "liberator". The reality is different. Stalin and his troops entered Bulgaria as occupiers to install a sinister Soviet-style communist regime that resulted in the deaths of tens of thousands of Bulgarians and the suffering of millions more.

The refusal of the capital authorities over the years to respond to the demands of its citizens to dismantle MOCHA is mainly due to the fear of the dominant pro-Russian political and economic influence.