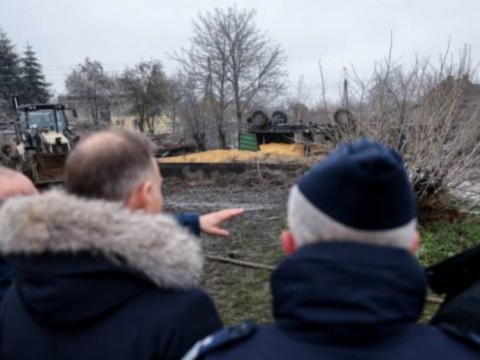 The European Parliament is preparing to declare Russia a state sponsor of terrorism because of the frequent attacks on civilian targets in Ukraine - energy infrastructure, hospitals, healthcare facilities, schools. The document will be a step forward in preparation for holding Vladimir Putin and the Russian government accountable before an international tribunal.

Meanwhile, Dmytro Lubinets, the Ukrainian Parliament Commissioner for Human Rights, said the scale of torture found in the recaptured southern Ukrainian city of Kherson was appalling. He released a video showing a room which was allegedly used for torturing Ukrainians with electric shocks.

Ukrainian experts will take part in the investigation to determine where the rocket that killed two people in the Polish border village of Przewodow was fired from, Ukrainian Foreign Minister Dmytro Kuleba has reported. Our experts are already in Poland. We expect that they will be quickly granted access to the scene of the incident in cooperation with Polish law enforcement authorities, he tweeted.

Over 10 million Ukrainians have been left without electricity because of Russia's ongoing massive airstrikes against the country's energy infrastructure, President Volodymyr Zelensky said. Kremlin spokesman Dmitry Peskov explained the Russian missile strikes with Kyiv's reluctance to start peace talks with Moscow. He added that Russia would continue the so-called special military operation.