Day 270 of the Invasion of Ukraine: The Ukrainians will soon begin Evacuation in Kherson 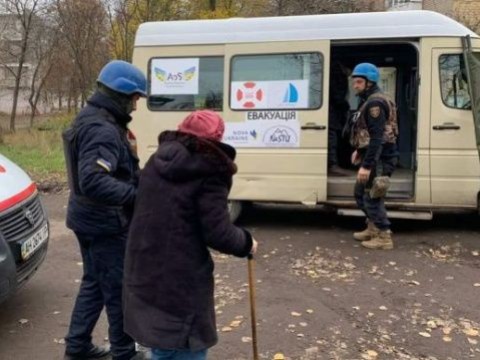 Ukraine: Electricity supply is under control and there is no reason to worry

The power supply in Ukraine is under control and there is nothing to worry about, the Ministry of Energy said.

In recent weeks, nearly half of Ukraine's energy system has been severely damaged following massive Russian strikes. Upcoming power outages have been announced across the country so that repairs can be carried out; authorities are urging households to reduce electricity consumption.

On the front - the heavy battles in Donbas continue. According to American military experts, Moscow is strengthening its positions in Luhansk, Donetsk and Zaporizhzhia regions. Active discussion of a possible second wave of mobilization continues in Russian media. However, such information has not been officially confirmed.

Gas accidents near St. Petersburg and in Sakhalin

Two explosions in the gas transmission and gas distribution network - near St. Petersburg and in the Far East - occurred in Russia in less than a day.

Yesterday, Saturday, a gas pipeline was cut off and exploded in the Leningrad region, after which the gas that leaked into the atmosphere caught fire, Interfax reported. No casualties were reported. The gas supply to the section was cut off, and teams started extinguishing the fire and repairing the damage.

Nine people, including four children, died and another nine were injured in an explosion of the gas installation in a residential building in the village of Timovskoe on Sakhalin. The explosion destroyed an entire entrance to the building, under the rubble of which authorities believe several more people are trapped. Interfax reported later this morning that of the 33 people who inhabited the entrance, 33 were alive.

However, the Ukrainian media emphasized the scale of the explosion near St. Petersburg. Anton Gerashchenko, an adviser to the Ukrainian Minister of Internal Affairs, showed it with an impressive video on Telegram. He emphasized that residential buildings in the city were shaken by the detonation.

At the same time, Radio Svoboda, citing a military expert, reported on its website that a Ukrainian unmanned maritime vehicle had struck an oil terminal in the Russian Black Sea port of Novorossiysk. The media notes that earlier the attack was reported by the Russian channels in Telegram, dedicated to the war in Ukraine. Official Russian authorities denied the information.

There is no link between the various incidents, but they all coincide with a Russian campaign of missile strikes on Ukraine's key infrastructure, particularly energy sites, the apparent aim of which is to keep Ukrainians cold and dark in the coming winter.

Medvedev: There is no point in negotiating if Zelensky does not recognize the collapse of Ukraine

There is no point in negotiating with Zelensky if he does not recognize the disintegration of Ukraine.

This was announced by former Russian President Dmitry Medvedev in one of his in-depth analyzes of Russia's war against Ukraine.

"No one, not even the staunchest Russophobes - the Poles, accepted the clumsy attempts to transfer the shelling of Poland to us. And this is an important symptom," he announced.

The former head of state listed three reasons in support of the "symptom". Here is the first one:

"Everyone is very tired of the regime in Kyiv. Especially of the neurotic Zelensky, who constantly inflames passions, whines, bites and extorts new and new handouts with money and weapons. He behaves like a hysterical child with psychological problems."

Nine months after the start of the war, Medvedev still believes the West wants to preserve its relationship with Moscow. His second argument rests on this confidence of his:

"The USA, NATO and the EU do not want a final break with Russia. Hence the frequent attempts to convince Kyiv, to push it towards negotiations".

"Zelensky does not need negotiations for obvious selfish reasons. They are very dangerous for him, as already mentioned. After all, if he does not recognize the reality of the collapse of Ukraine, there is no point in sitting at the negotiating table. Does he admit - he will be killed by his nationalists, who are connected with the army leadership. And of whom he is scared to death. Zugzwang."

She explained that some citizens have expressed a desire to leave Kherson and the area around the city of Mykolaiv.

"It is possible that this will happen in the next few days," Vereshchuk said during a briefing.

According to her, the Ukrainian government has already prepared the evacuation. Vereshchuk added that earlier this month, before withdrawing from Kherson, Russian troops destroyed critical infrastructure.

"This is a completely voluntary evacuation. Now we are not talking about a mandatory evacuation," stressed the Deputy Prime Minister.

The government has several options, one of which is to use Mykolaiv as a transit point before sending citizens to safer areas in western Ukraine, she said.

Britain will help Ukraine with its air defense

Britain will help Ukraine with its air defense. This support was confirmed by British Prime Minister Rishi Sunak at a meeting with Volodymyr Zelensky in Kyiv. The Ukrainian president rejected the possibility of a short-term truce with Russia.

Millions in Ukraine live with electricity regime in the winter that has already arrived. In Kyiv, 29-year-old Evgenia is raising a 10-month-old baby and lighting her equipment with candles.

"Of course, the situation can get worse, I can decide to go abroad. Without electricity, gas and heating, there are no conditions to survive with a child," says Evgenia Maksimova.

The mayor of Lviv also commented on the electricity situation.

"After the recent rocket attacks, I think Lviv residents have a better understanding of the conditions in which people live in Kharkiv, Zaporizhzhia, Mykolaiv and most cities," said Andriy Sadovii, mayor of Lviv.

All our fighters who hold the front in Donbas are heroes, President Volodymyr Zelensky said in his video address.

"Extremely heavy fighting is still taking place in the Donetsk region. About 100 Russian attacks were repelled in the last 48 hours," he reported.

The new British Prime Minister Rishi Sunak made a surprise visit to Kyiv.

"We are providing new air defense support, including 120 anti-aircraft guns, radars and anti-drone equipment. We are expanding our training for the Ukrainian armed forces with the specialist expertise of British medics and engineers," added Rishi Sunak.

One of the goals of Russia's massive missile strikes in Ukraine is to exhaust Ukrainian air defenses, the United States deputy defense secretary said. The Ukrainians will get what they need to keep their air defenses viable, comments Colin Kahl.

Russia: Ukraine has executed more than 10 unarmed prisoners of war

The ministry cited a video circulated on Russian social media that it said showed the execution of Russian prisoners of war. Reuters notes that at the moment it has not been able to verify the credibility of the footage or the claims of the Russian department.

"The brutal killing of Russian prisoners of war is neither the first nor the only war crime. It is a widespread practice of the Ukrainian armed forces, actively supported by the Kyiv regime and apparently ignored by its Western patrons," the ministry said in a statement.

The video shows surrendered Russian soldiers lying on the ground in Makeevka in Donbas. Automatic weapons fire is then heard and footage shows around 12 dead bodies. It is not clear when the video was taken or who took it, Reuters noted.

"The published new footage with evidence of a mass bloody executions done by Ukrainian soldiers to unarmed Russian prisoners of war confirms the cruel nature of the current Kyiv regime headed by Zelensky, as well as those who protect and support it," the Russian Ministry of Defense said.

The Chairman of the Human Rights Council at the Kremlin, Valery Fadeev, announced in Telegram that he will send the video to a number of international organizations. "This is a demonstrative, defiant crime. It violates all possible conventions prohibiting the cruel treatment of prisoners of war, norms of international law and simply morality. We will insist on a reaction of the international community and an investigation, and I am no longer so pessimistic about this," Fadeev wrote.

He adds that he plans to send information about the massacre in Makeevka to two thousand addressees, including the Office of the United Nations High Commissioner for Human Rights, the Organization for Security and Cooperation in Europe, the Council of Europe, Amnesty International, the International Committee of The Red Cross and other international organizations, politicians, ambassadors, journalists and human rights defenders.