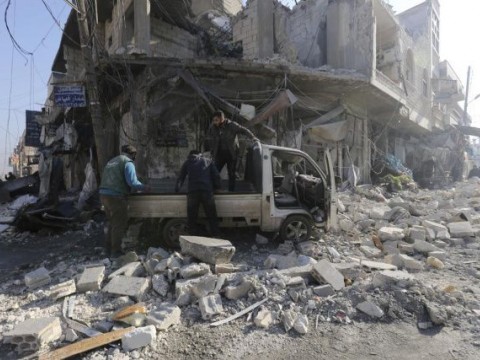 Turkey has carried out several airstrikes against the city of Kobane, Syrian Kurdish-led forces have reported.

"#Kobane, the city that defeated ISIS, is being bombed by Turkish occupation planes," Farhad Shami, a spokesman for the Kurdish-led Syrian Democratic Forces (SDF), tweeted.

Turkey views the Kurdish People's Protection Units (YPG) - the main component of the SDF - as an extension of the outlawed PKK.

The PKK denies involvement in the attack in Istanbul that killed six people.

Kobane, a Kurdish-majority city in Syria near the Turkish border, was seized by the self-proclaimed Islamic State group in late 2014 before Kurdish fighters drove them out early 2015.

According to the Syrian Observatory for Human Rights, Turkish airstrikes in northern and northeastern Syria have killed at least 6 members of the Kurdish-led Syrian Democratic Forces (SDF) and 6 pro-government soldiers.

The Turkish bombardment targeted SDF positions in the northern province of Aleppo and Al-Hasakah in the country's northeast, Rami Abdel Rahman, director of the non-governmental organization monitoring the war, told AFP. The strikes also targeted positions where Syrian regime forces were deployed in Raqqa and Al-Hasakah provinces, killing six members of the SDF and six members of regime forces.

Turkey's defense ministry tweeted a picture of a plane taking off for a night operation, along with the words "The hour of reckoning has arrived".